Menu
Home > Interesting Facts > How Were the Pyramids Built? 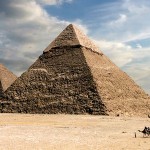 For the dynasty to work for the great pyramid it had to have been built in 20 years. If work was done on it 7 days a week 10 hours a day 365 days a year a stone had to be laid every 2 minutes.

But the vast majority of the workers were farmers that could only work during the flooding of the nile, 3 months out of the year. Accounting for that, a stone had to be laid every few seconds, with an accuracy unparalleled in the modern world.- The great pyramid has a 13 acre base, using satellite measures it was determined that the top of the pyramid is a quarter of an inch off the center of the base.